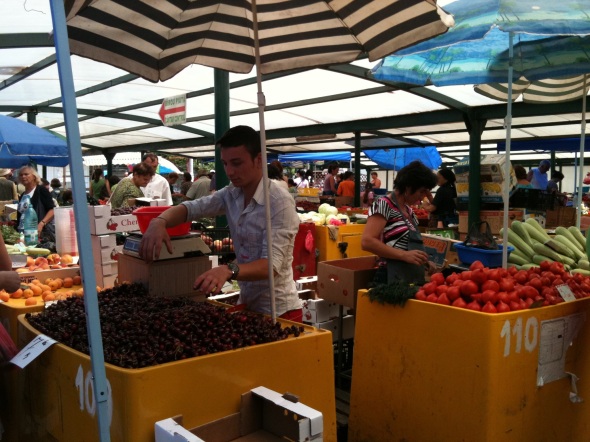 Today was a pretty mellow day. I (Jessie) got caught up on some home schooling in the morning with Naomi and Mae, made a giant stack of clătite (Romanian panckakes, similar to crepes) for lunch so we could use up some căpșune (strawberries) we got at the market last week, and headed out to the market with Naomi in the afternoon.

I love going to the market here. It is one of my weekly highlights, because I really like using the tramvei (tram), I love wandering through the aisles of fruits, veggies, flowers, honey, cheese, and meat, and it is my best opportunity to practice hearing and speaking Romanian. So that I can start to get to know some people, practice my Romanian with them, and eventually progress in conversation beyond, “I’d like two kilograms of potatoes,” and “Thank you,” I have been trying to go to the same vendors each week (if their prices are good). Because of my blonde hair or my slow, pitiful Romanian–or more likely because of the cute blonde-haired children I bring along–I easily stand out and am remembered.

Today, I was asked by three different people which country I was from, even though I didn’t speak in English, haha! But, I was excited, because I actually knew what they were asking me, even though they asked in Romanian. Even better, I could answer back in Romanian! As usual, I got, “Wow” and “Whoa!” But the most encouraging part was when the women who sold me the strawberries asked if there were strawberries in America also. I answered, “Da, dar aici–foarte bun!” They laughed! That means, “Yes, but here, very good!” I tend to forget verbs, but at least I’m making some sense.

Having Naomi along was fun, as it was a good time to get mama-daughter time in with her, and now that she’s getting a little older, I think that’s really important for her to hang out with mom, ask questions, chat, and learn how to do grown-up things. She loved it, but she was thrilled when an older lady came up behind us, saying, “Domnișoară, Domnișoară! Doamnă!” which means, “Miss, miss! Ma’am!” As we turned to her, she handed Naomi a generous bag of strawberries, and started speaking to us with a big smile and fast Romanian. I explained that my Romanian was not very good and that I couldn’t understand her (in Romanian), but she just kept smiling and talking about Naomi. I asked, “Pentru?” and pointed at Naomi, meaning “for Naomi?” She nodded and smiled and walked away. Naomi was so pleased and carried it all the way home herself.

I realized later that Friday is Children’s Day here in Romania, and one of our friends here, Cristiana, had explained to us that strawberries are a popular treat for children on that day, so I’m thinking that was her Children’s Day gift to Naomi. I emphatically told the woman, “Mulțumesc, foarte mult!” I feel like we will soon be more a part of this beautiful culture, and I cannot wait until I can speak even more Romanian!

To market, to market to buy a fat pig. 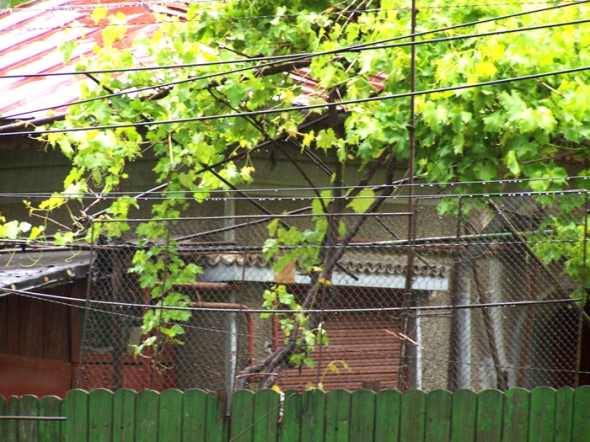 It’s been rainy the past few days, so we’ve been getting more done inside.  Today, we spent a lot of time studying Romanian.  Since we don’t have a ton of money for tutors or classes, our strategy is going to be using the materials we already have (books, Pimsleur audio MP3s, Byki, and Google Translate) supplemented with heavy doses of real-world usage, conversational partners, and an occasional tutor to make sure we’re learning things correctly.  The key ingredient will be the self-discipline to actually sit down and learn.  To help with that, today I started creating a comprehensive “lesson plan” to force us to stick to a schedule and track how well we’re learning the language.  Rather than just randomly trying to learn as much as we can, never sure if we’re actually getting anywhere, we’re going to have a systematic strategy.

Speaking of that, I had my first full conversation entirely in Romanian with a real, genuine Romanian person, and I understood everything we talked about.  It went something like this:

Me: “Alo?” (Aloe? Salute? Sit down, you high Duke. She tear, oh. You be the man who mashed the feta cheese…  If you don’t understand, click here.)

It was just a simple conversation, I know, but it was the first time I understood everything and didn’t have to guess based on context.  It felt so good.

Other milestones today include finally getting our rental contract (necessary for residency permits), bandaging Mae’s chin (she cut it open pretty good on the tile floor), and finding a better way to say “We came to tell people about Jesus” (Am venit sa le spunem oamenilor despre Iisus.)  The sentence I learned before actually translated to, “We came to speak for Jesus,” which is good I guess but not exactly what we were going for.

I got some feedback from Filip today on some Romanian tracts we brought with us.  His honest opinion, which is what I want, was that they weren’t very good except for some that I made for street ministry in Milwaukee that told my story of coming to God.  The others he said were fine but Romanians, especially in Bucharest, have heard it all already and would probably just dismiss it like they have all the others.  Sharing my story would get around all the arguments and draw people in to want to know more.  So my goal is to redesign it to share my testimony, talk about what brought us to Romania, and give a quick Gospel presentation, all in Romanian.  When I get that done, I’ll feel ready to share the Gospel.  Because then even if I can’t say the right words or they don’t know the English words, at least I can give them a pamphlet that has it in there.  Plus, I’ll have my contact info all in there so I can stay in touch with those I share with and keep pursuing the relationship.

Anyway, those are my evangelism goals for now – learn the language as much as I can and redesign my tract so I can hand it out to all the people who ask us what we’re doing here.

On the home front, the kids seem to be having a hard time now.  They did really great on the airplane, in our temporary housing, and as we’ve gotten settled into our apartment, but now I think it’s sinking in that we’re not just on vacation.  They’ve commented how they’re bored with the food already.  Bread and jam, cheese, and sausage used to be really exciting and new for them, but now they just want Cocoa Puffs and Lucky Charms.  They’re tired of not being able to pour their own water, since the faucet water isn’t healthy and they can’t lift the big water jugs.  They miss having beds (they got delivered today and will be set up in a week!).  The small elevator used to be fun, but now they’re really annoyed with it.  They started talking about all the weird smells.  They don’t like cars being everywhere whenever we go outside.  When we go for prayer-walks, they huddle right next to us now, nervous about new people, dogs, and cars all over the place.  Overall, they’re doing really good adjusting, but I think they’ve reached a point where they’re starting to miss the way things used to be.  Just gotta press through and then they’ll be happy again.

In some funny news, we’ve discovered that expiration dates don’t mean here what they do in the States.  You know how you can buy some eggs that say they expire May 31 in the states, and they’ll probably be good until June 6?  Not so here.  Due mostly to the fact that there are fewer preservatives used in food here, if something says it expires May 31, it probably will go bad by May 25.  We bought some fresh chicken in a grocery store 3 days ago, and when we took it out today to cook for our lunch guest, it was green, sticky, and smelled like rotted meat.  You’d think the fact that it smelled like rotted meat would have tipped us off that it had gone bad, but we poked it, prodded it, stuck our noses in it, looked it up on Google, started cooking it, then finally had second thoughts and decided to go buy some new chicken just in case it really was bad.  When we got the new chicken, a thorough analysis showed that the original definitely had something wrong with it.  The new stuff didn’t smell like rotted meat.  Good clue that it was better.

That was during lunch.  During dinner, Jessie poured the girls some milk that I just bought yesterday and wasn’t set to expire for a few days, and after they drank some of it, Naomi told me, “Daddy, this milk smells like poop and tastes a little like poop too.”  “Really?” I said, picking up a glass and sniffing it.  I wouldn’t describe the scent as poop, but it definitely wasn’t Chanel Number 5 either.  So then, like any good father, I took a nice big gulp.  And turned to the sink to spit it out right away.  It had spoiled and tasted terrible.  I rinsed my mouth in pear juice and then gave the girls each big glasses of juice in penance for making them drink spoiled milk.  They told me they each had drank about half a glass before I got there.  I was both disgusted and impressed by their abilities.

Now, when I bought the milk yesterday, I had Naomi with me.  As I stared at all the different kinds of milk, I found the cheapest one and grabbed two liters of it.  “Daddy,” Naomi had said, “don’t you think that since it’s the cheapest it might be the worst?  What if it tastes really bad?”  “No,” I told her, “cheaper things taste the same.  Sometimes even better.  You’ll see.”  And she did.