Wow, it has been a really long time since we’ve made any posts here, but it’s about time we get back to it. Today’s post is mostly a collection of videos. Our church, Biserica Piatra Vie (Living Stone Church), supports a missionary to the city of Bucharest, who shares the gospel, passes out gospel tracts, and simply spreads the good news about Jesus and the gospel around town. His name is Daniel, and just a few months ago, he married Maria. They’ve been living in a tiny room in his mother’s home, but there is not hot water or a kitchen, and the bathroom is outside (it gets cold here in winter in Romania).

God put it on our hearts to help them, but we weren’t sure how. Not being able to find an affordable place for them to live, Jake got the idea to use one of the popular online fundraising websites to raise money for Daniel and Maria to build themselves a home. Daniel used to work in construction in Finland, so he had plans all ready and only needed money to buy materials and hire his brother to help him.

Well, after only a few weeks of the fundraiser going live, the money was raised, and immediately Daniel and his brother Marian got to work. Jake has helped a bit, and he’s gotten some great clips of the work being done so far. Check them out below. While you’re at it, pray for Daniel. Pray that God would continue to bless his evangelism in Bucharest. He’s gotten to talk to so many people about Jesus and been able to follow up with several who want to know more, and we want to see God multiply this fruit and see a big harvest reaped for His glory right here in Bucharest!

Anyway, I try to keep up a little with the news about Romania as much as I can, and I read on Tuesday that two of Bucharest’s most exclusive and posh night clubs were closed down this past weekend for financial fraud. Bamboo and Barletto are clubs in the northern part of the city, and I’ve heard they are difficult to get into, but they are notorious for bringing in lots of exotic dancers and catering to the elite and expat community of Bucharest.

Now, the clubs are closed down for only three months and many expect them to open sooner due to appeals in court by the owners, but I take it as encouragement to keep on praying for the crumbling of this offensive industry that markets women as objects to lust over and use for profit rather than as people created in the image of God for His glory, and that lures men into the addiction of pornography for the sake of making money.

Keep praying and keep exalting righteousness! God is big and He is good.

Jake and Ben and our Canadian missionary friend, Jason, have been visiting a couple of Gypsy communities on the west side of Bucharest for the past couple of months, and tonight I got the chance to go minister with them since Ben volunteered to watch the kids for us. Taking Isaac along with us, Jake and I headed out around dinner time and met up with Jason.

We walked a short ways down the road and then turned off into a vacant lot  by the railroad tracks. Tucked back among some trees and bushes, we come upon a family huddled around a fire. In their little community, there were a few shacks with about three sides each to them, lots and lots of trash, and a bunch of kids.

While the adults there seemed very hardened to the gospel and were mostly interested in getting things from us (we brought some fruit and a bunch of bread, but later we saw many of them lighting up cigarettes, which are very expensive here), my heart broke for the baby, toddlers, and other children. How were they going to stay warm come winter time without four walls to keep out the wind chill? Do they get enough to eat or does more money go towards cigarettes?

But one little girl stuck out to me the most: Lavinia. She is nine years old, and in the third grade and came bouncing up with a giant smile about ten minutes after we arrived. She said she has faith in Jesus, loves going to school, and really wants a Bible to read with pictures in it. The hardness of those around her and of her circumstances had not broken her joy and innocence, and I’m praying it never does.

After we prayed for them, gave them some coats, hats, gloves, and bread, we headed out to visit Vasilica. I’d heard a lot about this Vasilica from Jake, Ben, and Jason, and I was excited to meet her. She recently decided to follow Jesus and is now crazy about following Him and seeing others around her do the same. She is the grandmother, bunica in Romanian, of about six little kids and several older ones. Most of her children are heroin addicts and don’t take care of their children, so it is up to this grandmother to raise them, feed them, discipline them, and teach them about Jesus in this tiny one bedroom little house.

Her living situation was definitely better than at the other place by the train tracks; she has electricity, a washer, a sink, and a refrigerator. But there is a lot of darkness there as well. However, she is a light. And I felt a glimpse of God’s love and delight in her while there ministering, praying, and sharing from the Bible. Before going, I felt like God wanted me to encourage her with the verse 2 Timothy 1:5, “I am reminded of your sincere faith, a faith that dwelt first in your grandmother Lois and your mother Eunice and now, I am sure, dwells in you as well.” Paul wrote this to Timothy who went on to do great things as a minister of the Lord. But Timothy did not have a family of believers growing up; he had a grandmother and a mother who loved God and imparted their faith to him.

We encouraged her to not grow weary in doing good, to be a light, to train up the children in the way they should go. She was visibly moved, crying and praising God. We also prayed for one of her granddaughters to be healed of a painful toothache. We prayed and nothing seemed to happen right away, but a few minutes later she went from groaning in agony and holding her jaw to smiling the biggest smile and praising God! What a beautiful God we serve!

Vasilica doesn’t have a church she attends regularly, and it is difficult for her to leave all the children behind to go, because she lives in a dangerous area filled with addicts and prostitutes. So, I felt very humbled and thankful to be a part of bringing church to her. My heart was aching with the love of God for the people of this city so many times today, and the burden to pray and intercede for it is even greater. 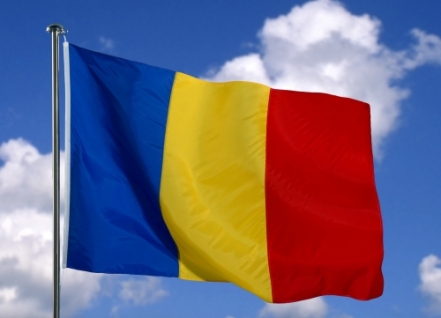 I don’t think we’ve shared this story here, so I wanted to give a quick testimony of something cool God did for us a few months ago.  We’d been working hard trying to learn Romanian, but it was a slow and grueling process because the resources aren’t as abundant as for the big languages like Spanish, French, German, etc.  Even Chinese and Russian have more resources out there.  With only 20 million speakers and no real worldwide influence (yet), Romanian isn’t much sought-after as a language.

So we bought all the books we could find, some audio lessons, movies, and found some free software online (byki), and we were slowly but surely working our way through everything.  It was frustrating though, because we weren’t quite sure how our pronunciation was, and it was difficult to decipher some of the more complex aspects of the grammar.

We looked for classes, more software, anything that would work better than what we had, and nothing was turning up.

While doing a support-raising meeting, the person I met with told me, “Hey, you should give Vin and Jess a call.  They just got back from Moldova, where they speak Romanian, and Vin and Jess got extremely fluent in the language.  And I think they live a couple blocks from you guys.”

Turns out they did live just a couple blocks from us, so I tried calling them right away.  No one answered.  I tried a few days later and still no one.  I tried at least once a week for a month, leaving voicemails every time, and never spoke with a person.  So I just gave up and we went back to learning on our own.

One night, as I was calling people to schedule support meetings, I thought, “You know what?  I’ll give Vin and Jess another call.  It’s been a while, maybe I’ll reach them tonight.”

I grabbed the phone, dialed, and waited to hear the usual answering machine message.  Instead I got a very rushed, “Hello?”

“Hi,” I said, taken off-guard that I was speaking to an actual human, “are Vin or Jess home.”

“No, you’ve got the wrong number.”

Then, rather than just saying the normal, “Oh, OK, sorry for bothering you,” I asked the mysterious rushed voice, “What’s the right number?”

“Hold on, I’ll be right back.”  A minute or two of holding the phone and waiting in silence.  “OK, here it is…” and then she gave me a new number to call.

I called the number, talked to Vin, and the next morning he walked over to our house to give us our first real, live Romanian lesson.

I love how God works.  We needed a tutor, so he had one come back from Moldova for us, had him live a couple blocks from our house, gave us a wrong number to reach him, and then brought him right to our door.  Praise God!