Tricycles and Trains – This Must be How Evangelism Works in Cluj 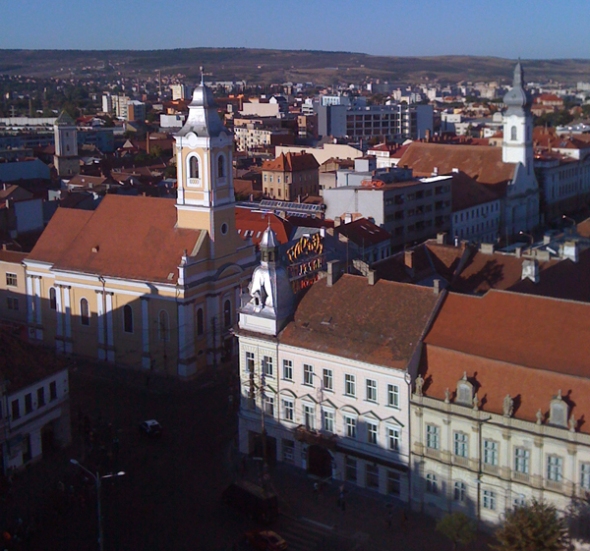 So we were at a church-planting conference in Cluj last month, like I’ve mentioned previously.  Like all conferences, we didn’t agree with everything taught, but we learned some cool insights about planting churches that’ll work really well here in Romania.

After the conference, Ben and I were hanging out in the city center, processing everything discussed, when an old man on a red tricycle rode up to us.

“Do you know Jesus?” he asked in Romanian.

“Yes, yes, we’re Christians,” we told Tudor, and then in mixed Romanian and English, the three of us talked about the goodness of God and why it was necessary to become born-again.  Then he started belting out “The Battle Hymn of the Republic” really loudly in Romanian, so Ben and I felt obliged to join in.  I’m not gonna lie – as weird as it was, it kinda’ ministered to me.

Before he left, Tricycle Tudor introduced us to his friend Mr. Police Officer and then rode off to sit on a bench.  I felt like I was in some strange children’s TV show.

After he was gone, Ben and I talked about the weirdness of an old man on a tricycle sharing the Gospel with us in a language we only partially understand.  Yet, as odd as his approach was, at least he approached us.  Too many times, people are afraid to do evangelism because they don’t want to look weird or say the wrong thing or offend the person, but we just gotta get out there, open our mouths, and trust that Jesus will give us words to speak.  Yeah, you might look weird, but probably not any weirder than Tricycle Tudor.

That evening, we had a long overnight ride on the train, so I was praying for divine appointments onboard.  God answered us.  We ended up sharing a booth with a newly-married Orthodox couple.  Over the course of the evening, we talked about every topic possible – our families, growing up, going to college, jobs, politics, and religion.  At one point, Ben and I got to share our testimonies with them, how Jesus changed our lives, and I talked about how a lot of people go to church and understand religion, morality, and an idea of God, but not very many people in Romania actually have a real relationship with Jesus.

I purposely decided not to talk about the church as an institution or bring up anything about Orthodox Christianity.  I just talked about Jesus, because when people see Jesus for who He really is, He’ll clear up wrong religious ideas.

After a night of talking and sort-of-sleeping, we had all exchanged phone numbers and emails, and we’re excited to stay in contact with this young couple who promised to show us around their hometown of Braşov one day.  A few days later, I got an email from them saying how much they, “loved meeting some people who loved Jesus so much.”

Whether by tricycle or train car, in awkwardness or simplicity, the Gospel must be preached, and Jesus will draw people to Himself, because that’s what He loves doing.  🙂

On the Train to Cluj

There was a conference in Cluj at the end of August that a lot of the next wave of ministry leaders and church-planters in Romania were attending, so Ben and I were excited to come along and check it out.

The conference was great, and I’ll probably blog about that later, but first, let me share some of the highlights from the train ride.

We went from one side of Romania to the other, so the ride took about 10 hours by train, passing along some of the most beautiful mountains, hills, and North Dakota style farmland I’ve ever seen.

We rode past dozens of tiny little villages and towns carpeted with the same classic houses with their rust red tile roofs in need of repair.  The villages look idyllic and beautiful, but life here is harder than in the big city of Bucharest – jobs can be almost impossible to find and the distractions of big city living are usually nonexistent.  I think it’d be fun to try living in one of the smaller villages sometime, but the young and the leaders tend to gravitate toward the bigger cities like Bucharest, Cluj, Iasi, or Constanta.

Besides the usual red-roofed homes, the landscape was dotted liberally with church buildings of one type or another – mostly Orthodox, but also Baptist and Pentecostal to be sure.  There are definitely plenty of church buildings in this country, but we’ve met very few Christians, especially in Bucharest.  Most people we meet call themselves Orthodox, but they don’t read the Bible, don’t pray, don’t attend church services, don’t know anything about the Gospel, and aren’t born-again.  They consider their baptism as an infant as good enough to, hopefully, get them into heaven one day, but they live with the fear that perhaps they haven’t done enough.  Of all the people in Bucharest we’ve met and talked to outside a church service, I think we’ve encountered maybe 2 that were born-again, between me, Jessie, and Ben.  Religiously-minded Romanians will sometimes tell you that there’s no need for missions work in Romania, because Romania is “a Christian nation,” but people who love Jesus here see things a lot differently.

Besides scenery, we met some interesting people.  When we first got on the train, a man who was sharing the compartment with us lit up cigarettes freely, despite the clear, and abundant, “No Smoking” signs posted all around him.

After that man left, we shared the rest of the trip with a couple in their 60s who spoke Romanian, Hungarian, French, and German, but no English.  We understood about half of what they were talking about and had some fun conversations about Obama and Jehovah’s Witnesses.  They drank a handful of beers on the trip, smoked cigarettes near the “No Smoking” signs, and kept spilling crumbs on everyone.  Another old guy we sat near told me something, pointed at them, and made a “they’re crazy” sign.

At one point, while I was typing up blog posts, the beer-drinking guy in his 60s leaned across the aisle, popped his head in front of my screen, and looked at what I was doing.  His wife smacked him and looked apologetic at me as she explained, “E curios.”

A young woman who shared our compartment was the draw of a lot of curiosity.  She looked Romanian, but she never spoke the whole time and didn’t understand Romanian or English.  Whenever she left to walk around the train or go to the bathroom, all the Romanians would start talking excitedly about the mysterious woman.

Another older man, probably in his 70s, came on board carrying a cardboard box marked “ice cream,” with a homemade handle fashioned out of wire.  The top was covered with a bag.  When he entered our compartment, he took the bag off and revealed a small puppy.  For the duration, the puppy attracted more interest than the mysterious silent woman.

And then we got to Cluj.